Hello! My name is Imogen Cotter, and I'm an Irish professional cyclist and current National Road Champion. Welcome to my website! 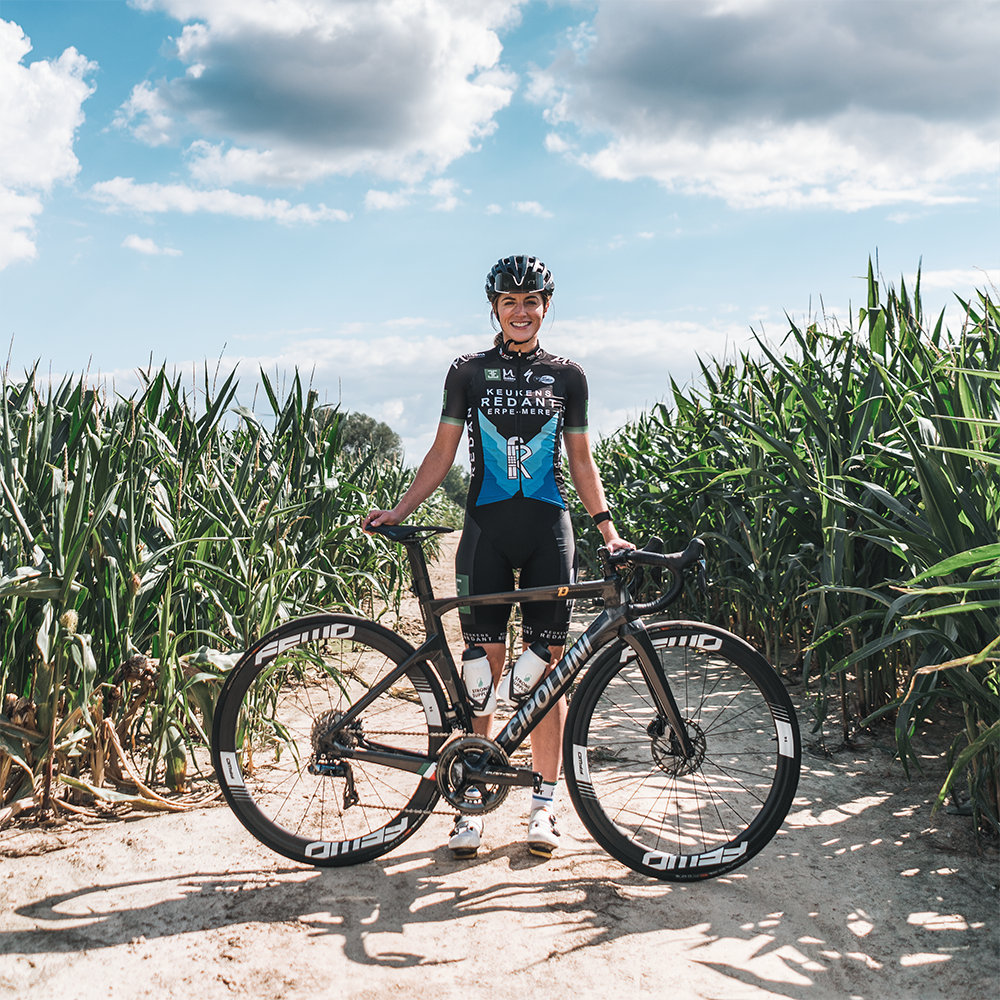 I've been cycling since 2017, and spent my first 18 months in the sport focused on the track. In 2019, I switched over to road and moved to Belgium to give it a shot. 2020 was hard for me, as it was for everyone, but I achieved some pretty big goals of mine - including riding in the Tour of Flanders! In 2021, I struggled to find a racing rhythm but turned things around at just the right time. I was selected to represent Ireland twice, I wore the climber's jersey in a race with World Tour riders and I was crowned National Champion in my last race of the 2021 season. One of the most common questions I get is about how I got into cycling, and my journey with sport so far, so I have gone into that in a bit more detail here. I hope you enjoy reading it!
‍

I’ve been sporty since I was just a kid. I started off with a local running group at age 8, then moved onto swimming, which I did throughout my early teens. I started to do spinning classes when I was about 16 because my dad had joined. From there, it was a natural progression into triathlons. I did quite well in triathlons but I was quite unlucky – doing stupid things like pulling off my timing chip with my wetsuit and not getting results tracked.

After a couple of triathlon seasons, where bad luck seemed to follow me, I decided to go back to running. That was when I really started to become a more dedicated and competitive athlete and when I was moulded into the athlete that I am today. I had a brilliant coach, I claimed 2 national titles on track, and 2nd at cross country nationals. It wasn’t all good vibes though. I was stuck in a cycle of getting a good training block done, getting an injury, having to rest, repeat. I felt that I was never able to get to the level I was capable of because I just couldn’t seem to break out of that rut.
‍

When I left university, I was a bit lost – I had fallen out of my training routine, and felt I didn’t really have any goals, something I hadn’t experienced in a longtime. I was living in London, and I decided to sign up for the Hackney Half. Having that goal made me determined again, and I started to get into really good shape.

"I have never been more focused on anything. I used to lie in bed, and play the beeps that would signal the start of the team pursuit event."

It was about that time that Cycling Ireland were starting up their Talent Transfer program. I had no idea what it entailed, I had never considered being a cyclist. My mum encouraged me to book flights and just come back to Ireland to try out. I thought, why not? I’d get to go home for a weekend and see my family so it sounded like a good idea.
‍

I did my first tests with Cycling Ireland in March 2017, aged nearly 24, and received word within a few weeks that my tests were good enough to get me through to the next round. I followed a 6-week training program and then came back to do a final round of testing. I was deemed good enough to make it as part of the national squad and I began attending training camps at the Irish training hub in Mallorca. Eventually, a greater commitment was needed, and in March 2018, I moved out to Mallorca to train full-time.
‍

I think that sounds like the dream to a lot of people, but it was actually an incredibly stressful time. When I look back on it, it was probably the time that I least enjoyed cycling. It was a high-pressure environment; we were training on the velodrome as much as possible, on a fast-track national program(meaning we had to learn quickly), and the difference between a good day and a bad day would come down to a matter of milliseconds. We also didn’t have any funding, which meant that I was relying on ‘Bank of Mum and Dad’ for very basic things like food shops and rent – not what I envisaged for myself at 25! Add to that the fact that cycling is a pretty expensive sport, and you can imagine why I was stressed.
‍

Throughout 2018, I trained relentlessly for one big goal: going to the European Track Championships in August. I have never been more focused on anything. I used to lie in bed, and play the beeps that would signal the start of the team pursuit event. I would go through every feeling in my head – the tension at the start line, the force through the pedals once we began, every bend of the track. I get nervous even thinking about it now! One month before the event, some new athletes were brought into the mix, and at the end of July 2018, I was told I hadn’t been selected on the team.
‍

That was one of those moments that I see as a crossroads in my life. I could make the choice to stay home and mope (which is what I felt like doing), or I could go and use my fitness elsewhere. So, I decided to go to Belgium and try my hand at bike racing there for a few weeks. I look back on that now and think it was fate that I didn’t get selected. As cheesy as it sounds, I am so grateful that I came to Belgium then. As soon as I got here in August 2018, I loved it. I started to finally understand why people liked cycling so much, and how fun road racing could be! I met my amazing boyfriend, and within a few months, I left the Cycling Ireland set-up in Mallorca and moved here.

"That was one of those moments that I see as a crossroads in my life. I could make the choice to stay home and mope (which is what I felt like doing), or I could go and use my fitness elsewhere."

In 2019, I started my first ever road-racing season. I signed with a team, S-Bikes Bodhi, and for the first time in my life, I had a brand new bike, with disc brakes andDi2. I was thrown in at the deep end – I went from barely any road racing experience, to riding against pros at 35-40km/h in a Belgian peloton. I got comfortable with being uncomfortable, and I started to embrace the fear that I was feeling. All that pushing myself to my limits paid off, and I started to find myself closer and closer to the front of the peloton. I had a couple of solo breakaways, a couple of attacks and even nabbed a 2nd place for myself at the Nationals. I got through to the semi-finals of Zwift Academy last year, after breaking my arm and being confined to the turbo trainer, and was in with a chance to win a professional contract with a World Tour team.

2020 brought about a lot of uncertainty around racing, so I returned to Ireland to be with my family for a while. While I was there, I began to dabble a bit in Zwift racing and used it as a motivation and a way of keeping race-ready when it seemed like everything was on hold. Eventually, things got back to (relatively) normal, and I returned to Belgium to resume racing. I was super fit in July and August - I ended up getting my first Belgian win and some other good results, so I was asked to come as a stagiaire to a UCI team, Ciclotel, at the end of the season. Unfortunately, all the long hours and tough training I had done over lockdown had really built up at this stage, and my motivation dipped completely. I started in the Tour of Flanders and Brugge-De Panne but I really didn't have the condition or mental game to be there.

At the beginning of 2021, I got COVID, and had to take 2 weeks completely off training, followed by 2 weeks of very gradually building up again. This came just as my training would have been ramping up for my racing season, and as a result, I came into February without much form. My coach suggested trying out for the Movistar e-team as a way of keeping motivated while I rebuilt my fitness, and to my surprise, I ended up getting onto the team! I ticked off a lot of my goals in the 2021 season - I represented Ireland twice, I wore the climber's jersey at a race with World Tour riders and won the National Road Championships. I've just signed my first pro contract and I'm so excited for what lies ahead in 2022!
‍